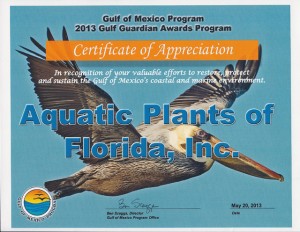 STENNIS SPACE CENTER, MS – May 22, 2013 – The United States Environmental Protection Agency’s Gulf of Mexico Program Office announced the winners of the 2013 Gulf Guardian Awards. Aquatic Plants of Florida received a Certificate of Appreciation for the excellent work it does to protect the Gulf of Mexico as a “Gulf Guardian.”

A list of the 2013 Gulf Guardian Award winners can be found at: http://www.epa.gov/gmpo.

About the Gulf of Mexico Program
The Gulf of Mexico Program was initiated in 1988 by the U.S. Environmental Protection Agency (EPA) as a non-regulatory program. Founded on the threefold principles of partnership, science-based information, and citizen involvement, the Gulf Program joined the Great Lakes and Chesapeake Bay Programs as flagships of the nation’s efforts to apply an adaptive management approach to large coastal freshwater and marine ecosystems. The mission of the Program is to facilitate collaborative actions to protect, maintain, and restore the health and productivity of the Gulf of Mexico in ways consistent with the economic well-being of the Region. 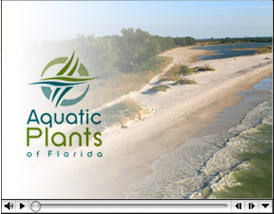